By Jessica A. York

SANTA CRUZ >> Homelessness countywide had dropped less than four percent in two years, according to information released Monday in an early preview of a regional census’ results.

For those watching a highly visible explosion of people living on the streets of the city of Santa Cruz and other parts of the county in the past year or more, a decrease of about 82 people — tallied during a single-day count in January — may come as a surprise, observers said.

Grassroots homelessness services provider Brent Adams disagreed with the census’ findings, attributing the drop to his belief that the survey was conducted without canvassers with enough expertise. Adams operates the Day and Night Storage Program and the Winter Shelter Program, efforts for which he said he has seen an increase 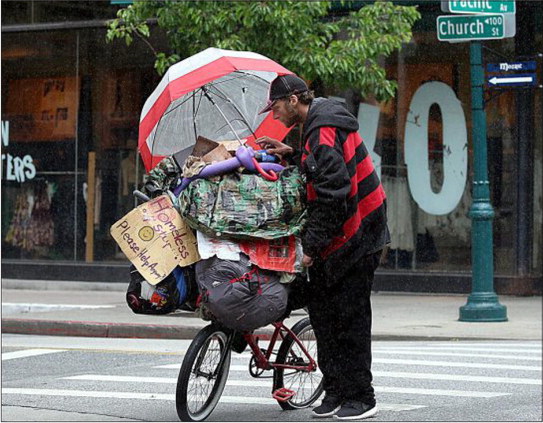 A man, carrying his possessions on his bicycle, stops in the middle of the crosswalk in downtown Santa Cruz to check for an item among his things.

“I believe the count is up, I believe the population is up quite a bit,” said Adams, who works with UC Santa Cruz interns to conduct his own smaller-scale Connecting the Dots Homeless Needs Survey. “I believe that the encampment last year and the encampment this year has drawn many more people into the county than had existed before, because of these stranger-attracting devices.

Every two years, officials hire a consultant to conduct what is known as a pointin- time count of the area’s homeless population, the data for which is required for federal and state grants. Early one day at the end of January this year, volunteers coordinated by the Watsonville-based Applied Survey Research spread across the county for a head count.

“Although the numbers are down and that’s a nice thing to say, they’re not. We’ve seen a slight decrease and I don’t think anybody’s claiming victor y, here,” Santa Cruz County spokesman Jason Hoppin said. “We hope it represents this turning point. We’re glad that we didn’t see some of the increases that we see in other communities. It’s obviously still a major issue of concern for the community and one that we continue to work on.”

Since the last homeless census, several initiatives aimed at reducing homelessness have launched. In a release from the jointjurisdiction Homeless Action Partnership, some of those efforts named to improve community response to homelessness include the Smart Path Coordinated Entry System, a way of ranking and sharing assessments of program participants across agencies; the Housing Authority of Santa Cruz County has increased its available Section 8 housing vouchers by 4 percent; and less than 10 new housing units catering to formerly homeless persons have been built.

Homeless Services Center Executive Director Phil Kramer said the homeless count’s slight decrease was attributed to “many programs and initiatives which are at the heart” of his organization, such as the reduction in chronic homelessness, on which the specialized housing effort known as the 180/2020 initiative is focused.

This year’s census, its results still preliminary, estimated there were some 2,167 people living in homeless in the county. Two years earlier, that number was 2,249. Cityby- city specifics were not available, Hoppin said, and the full report will be made available by the end of August or earlier. A draft version of the census, commissioned by the Homeless Action Partnership, is being circulated among agencies and officials for review, he said.

“About two-thirds of the state have released their numbers, so we thought that it was appropriate to get our number out there,” Hoppin said. “There’s a lot of statistical analysis that goes into these figures. So they have to verify all that kind of methodology. But I don’t think the city of Santa Cruz is going to change all that much from 2017.”

Of information released this week, more than 78 percent of those counted had no form of shelter, down from 80 percent in 2017. Those experiencing chronic homelessness dropped two-thirds, from about 600 to about 400 in the past two years, while veteran homelessness similarly decreased from about 236 to 150, Hoppin said. Youth and family homelessness, however, “showed slight increases,” he said.

According to data gathered in the 2017 homeless census, Santa Cruz County had the nation’s highest rate of unaccompanied and unsheltered homeless youth among small cities and counties, at a rate of 98%. Contact reporter Jessica A. York at 831-706-3264.

Parked on Marine Parade, Maggie Perry, who is homeless, checks a map of the Seabright area before dawn in January as she teams up with Don Lane to count homeless people in their sector of Santa Cruz. Some 41volunteers and seven homeless guides branched out across the county as part of this year’s Applied Survey Research point-in-time homeless count.

Click here to see this page in the eEdition: